A new commercial and residential development called Midtown at Bonita gained approval from the Bonita Springs City Council at a Sept. 2 public meeting.

Midtown would be built on 67 acres to the east of Interstate 75, on the northwest corner of Bonita Beach Road and Bonita Grande Drive.

Traffic limits created by computer models will dictate the total size of the project. No development can exceed 1,165 hourly trips at the busiest time of day. The approved community falls below the traffic limit, according to documents presented to the city council.

Both the city council and zoning board granted the project unanimous approval. Zuckerman Homes, based in Coconut Creek, is heading the community. Sienna Reserve and Venetian Pointe are local communities they have completed. The project will cost developers $186 million, developer representative Richard Yovanovich said.

The Bonita Beach Road corridor east of I-75 is one of the fastest-growing areas in the city, and some councilors including Chris Corrie said the project might lower congestion on the busy road.

“There is needed development in that part of Bonita Springs,” Corrie said. “It might cut down on the traffic going down Bonita Beach Road west toward U.S. 41 because people are going to find things they need (east of I-75).”

Flooding and water control were a potential problem the developer addressed since planning began 14 months ago, said Emilio Robau, a civil engineer hired by the developer.

“We knew that we didn’t just have to get it correct … we had to provide public benefits to the community in order to satisfy the concerns of community members and the responsibilities of council to mitigate those concerns,” Robau said.

The development abuts the Kehl Canal, a short, constructed channel that acts as the headwaters of the Imperial River. The canal, which begins east of Bonita Grande Drive, was dug in the 1960s as part of a failed residential project. Rains from Hurricane Irma swamped the area as the Imperial River exceeded capacity.

The developer has promised to adjust its portion of Kehl Canal and build two lakes to help control flooding in future Irma-level flooding, Robau said.

A berm will surround the community and divert water into two separate water retention ponds. More than half of the 67 acres will be used for water retention, green space and vegetation.

Residents of the nearby Worthington Country Club, which flooded heavily in the aftermath of Hurricane Irma, worked closely with the developer and approved of the design, said Mike Danieli, former Worthington Board of Directors president. 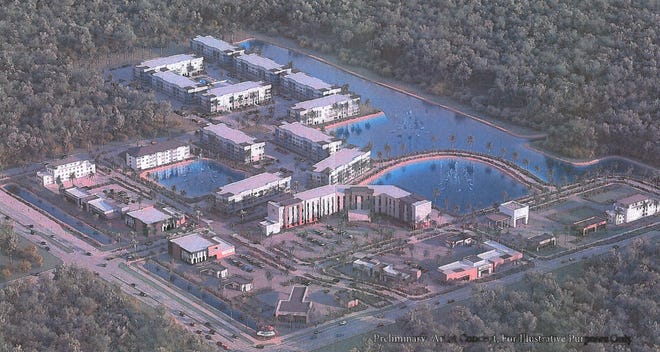